Surfing Across The Mud 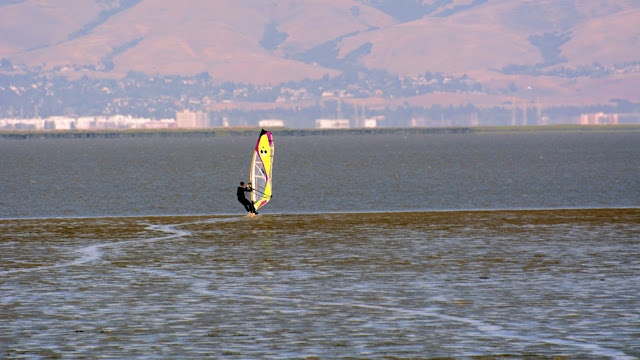 The other day I saw an amazing sight, a windsurfer launched from a dock and was trying to go down a narrow channel of water. It was low tide and he was hemmed in by mud flats on both sides. Almost immediately he veered off and got stuck in the mud. He dropped the sail and stood there for a moment while his buddies laughed at him. He was less than two feet from the channel. In his situation (and if I knew how to windsurf), I probably would have stepped off the board into the mud and struggled to drag the whole contraption back into the channel. But this guy pulled up his sail and tried to use the wind to maneuver back into the channel. Instead the wind caught his sail and started taking him farther out into the mudflat. He went with it, and with only one look back to laugh at his buddies, surfed across the entire mud flat and into the open water of the bay.

One of his buddies said to me," You've just seen a very rare thing."
"Yes I know," I replied, "and I got pictures!"

Later, I was thinking this would be a good metaphor for life.
Stuck in the mud? Surf across it!

Some of the folks that sail here have found that if you have the right gear you can pull this off. Most of us just wait for enough water to fill in tough :)

Watching him do it was a surprise to me but obviously I know nothing about windsurfing. Thanks for reading and commenting!

That has happened to me I had to maneuver with one hand to stay away from the mud.

You must be very strong! Thanks for commenting Isabella!
:-)