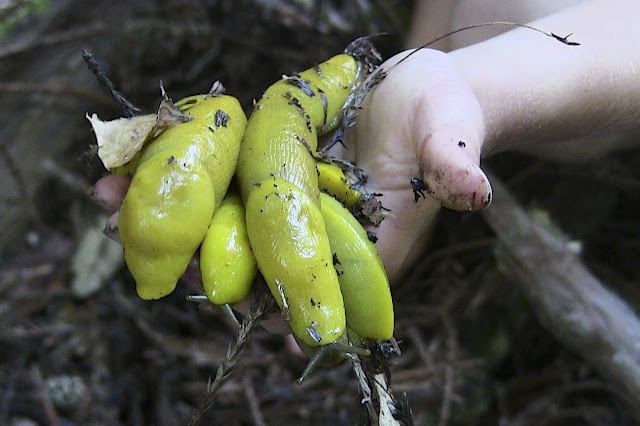 A child discovers some banana slugs and three adults come over to see . .

The Child's Point Of View

Look what I found Mom!  Aren't these cool?  They're green and squishy.  Look, here's some more! They're under this log!  I can hold all these in my hand.  Ooh, they're slimy.  Do you want to touch one? They're soft.  Look how they move.  This one's crawling up my arm!  Take a picture!  Hey, their eyes go in different directions!  Awesome.  Are you sure you don't want to hold one?  Well I don't think they're "gross."  You won't even touch one? That's a fail, Mom.

The Mother's Point Of View

Oh look what you found.  Those are Banana Slugs.  Eww, you're picking them up.  They're slimy.  You'll have to wash your hands afterward.  That's alright, I can see them from here.  No thanks, I don't want to hold one.  Yes, they're cool.   Okay, I'll take a picture.  No, I really don't want to touch one. Be sure to put them back exactly where you found them.  No, you can't take one home.

The Biologist's Point Of View

Banana Slugs, very interesting.  Do you know why they have so much mucus coating their bodies?  It's to keep them moist, otherwise they would dry out. The slime also provides traction, helping them move.  Do you see the two pairs of tentacles here?  What do you think those are used for?  For seeing, that's right. These big ones on top are the "eyestalks." The slug uses them to sense light and movement.  The lower pair here detects chemicals - they use them to smell.  If you want to know more about Banana Slugs you can google them.

The Environmentalist's Point Of View

Oh don't pick them up!  Well, try not to touch them too much.  You don't want to dry out their skin.    Did you know that Banana slugs eat dead plant material and recycle that into natural compost?  They are an important part of the ecosystem. Be sure you put them back under the log where you found them and try to position the log exactly where it was. Really you shouldn't be playing around here at all; you could be disturbing the habitat of many hidden creatures.  In fact everyone should get back on the path.  Actually they shouldn't even have a path here. It would be better to close this area off and keep people out.  Hmm, I better write up an environmental impact report.

Would anyone like to add their point of view?

Thanks harvmarv! I'm glad you enjoyed it.

Can you eat them?

Gross! thanks for reading.