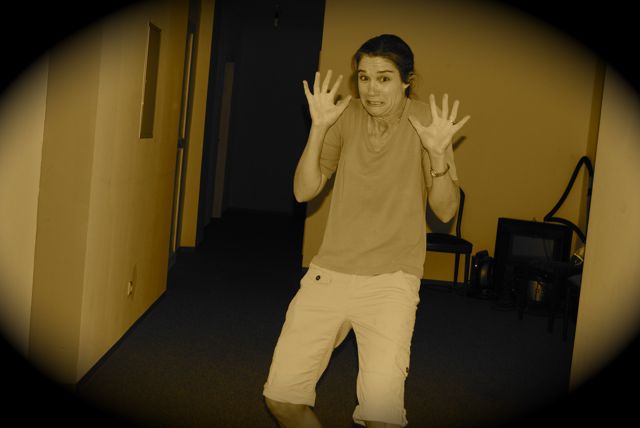 The hostel in Plankenfels Germany was not haunted, but it should have been.  Our family had been drawn to this little Bavarian town because of photos we'd seen of the nearby castle - Schloss Rabenstein.  The castle was perched on a cliff, looked properly imposing and had a working falconry.

Being so small (pop 865 in 2010),  Plankenfels didn't have many choices of accommodation.  This hostel - Factory 41 - had decent reviews and was cheap, so we decided to give it a try.
I had called the owner to make sure there would be room for us and told him of our arrival date.  He assured us we'd be okay; but when we arrived late in the afternoon, there was no one there.  In fact, Factory 41- at the end of a quiet street - looked empty.  Luckily, there was a man nearby who was just getting out of his car.  I went over to him and spoke in my limited German.  He said, I could find the owner of the hostel in the restaurant up the street.  "Which restaurant?" I asked.  He laughed and said there was only one.
We walked two blocks to the restaurant and went inside.  There was a wedding reception taking place and the staff was busy; but someone kindly showed us into the kitchen and pointed out an older woman who was making pastries on a large table.  She gave us a key to Factory 41 and told us (in German) to pick any room we wanted and she'd be there later to get us settled in.  The hostel was currently empty; in fact we'd have the whole thing to ourselves because she and her husband didn't stay there either.  "Uh oh," I thought.
Factory 41 used to be a large ceramics factory.  The building was white stucco, with door and window frames painted blue.  It was three stories tall and had many large rooms that had been converted into dormitories.  The hostel was advertised as having, "a lounge with a fun and cozy atmosphere shared by people from all over the world."  Their website also said, "We serve our area's famous Bavarian beer from our favorite small local breweries."  I had imagined a lounge and bar filled with happy people drinking flavorful beer, lots of laughter and talking.  But it was September and summer was over, I guess they'd all gone home.

My husband inserted the key and opened the front door.  We stepped inside.  The lounge was very large, with a linoleum floor, paned windows, orange vinyl couches and faux wood tables.  The floor was littered with crumbs, the tables needed wiping and dirty ashtrays were strewn about on tables and window sills.  At the far end of the room was the open kitchen.  We could already see it hadn't been cleaned.  Walking over we saw the sink filled with dirty dishes, counters that needed clearing and scrubbing and again, crumbs all over the floor.  Two thoughts went through my head.  #1 - "We're staying here??"  and #2 - "The owners must be awfully busy catering that wedding!"
Our children, ages 9 and 7, exclaimed loudly about the mess and wondered what the rest of the place looked like.  So we went to see the bedrooms.  The bedrooms were on the second floor, up metal stairs that were too steep and widely spaced ("watch your step!").  It seemed like a maze of hallways and dorm rooms, some large, some small.  The bathroom had exposed stone walls with a few showers and stalled toilets.  It was noticeably cold.
We had our pick of any room, so we decided to pick one near the front of the house.  Our room had about 8 cots, some pushed together to form a large bed.  It also had a couple of particle board desks and a window that opened onto grass and an outbuilding.  The carpet was old and brown, which was probably good because that way we couldn't see the dirt.  There were no sheets or blankets and no curtains on the window.

Our kids thought it was great.  They immediately started running around, exploring the hallways and empty rooms, playing hide and seek and jumping from cot to cot.  "It's fun now," I said to my husband, "but wait till tonight."  Despite it's major drawbacks we decided to stay.  It was late in the day and no one wanted to drive to another town; besides, we really wanted to experience Plankenfels.     The proprietress came in a bit later to apologize for the mess and give us clean (thank god) sheets and blankets.  She told us that not all the lights were working and the hallway ones were automatic - movement sensors.  Then she asked what we wanted for breakfast the next morning and wished us a good night.  We were free to explore the town.

We came back at dusk. The lounge didn't have a working light and who wanted to hang out in that mess anyway, so we quickly went up the stairs and made an immediate left to our room.  We turned on the light and made up our beds.  Then some of us had to go to the bathroom.  The hallway was getting dark and the only working light was the automatic sensor one in the ceiling.  It had wires hanging from it and we had to jump and clap a lot before it would finally turn on.  The bathroom was freezing and the only working lights were in the stalls.  They seemed very bright compared to the rest of the dark room.

The kids weren't playing hide and seek now.  Their biggest concern was finding a night light as the building got darker and darker.  Besides the ceiling light, our room had a few tiny reading lights installed in the walls, but if you dared to turn them on or off, you got a mild shock.  After we'd all been shocked once, no one would touch them except for my husband.  Most of the rooms didn't have working lights but the kids and I found one room that did. The light streaming through the open door provided just enough light to keep us from tumbling down the stairs in the middle of the night.  Now we were ready for bed.
My husband was out like a light (ha!) but the rest of us lay there wide awake.  The hostel wasn't  fun anymore.  It was huge and dark and empty.  The only sound was my husband gently snoring.  All I could think of was Jack Nicholson in The Shining lurching down the hallway with an axe.  I believe I was more scared than my kids!  To top it off, my chest had been bothering me and tonight it hurt pretty badly (I'd actually pulled a muscle, but didn't know it at the time).  So I wasn't just worried about 'Jack,' I also worried that maybe I had an unknown heart condition.  Luckily it wasn't windy or stormy outside or I would have really been scared!
The kids did end up falling asleep and I was left alone with my scary thoughts.  "This is ridiculous," I had to keep reminding myself.  "We're in a gentle, German town with friendly people surrounded by fields and farmland.  There is nothing dangerous here!"  But then my daughter awoke and told me she had to go to - The Bathroom.  I had to also, but I'd been putting it off.

Okay.  I took her hand and we went left, not right, or we'd fall down the stairs, and slowly we walked down the long hallway.  There were rooms to the left and right of us; we tried to ignore their dark interiors, who knew what lurked inside?  In the ceiling above us was the motion sensor light but it hadn't sensed us yet.  Beyond it lay the bathrooms but we couldn't see them because the remainder of the hallway was pitch black.  My daughter stopped dead in her tracks and waited while I clapped and waved, trying to get the light to come on.  Finally!  I took her hand again and we ventured on and into the bathrooms.  The stone stalls were even colder than before and very creepy.  We took care of business fast, then ran back to our room and jumped into bed.
Why is it when you have trouble sleeping that you have to keep going to the bathroom?  Later - when my husband got up and said he had to go, both our kids sat up and said they had to go too.  So did I.  Obviously, we'd all been waiting for Daddy to wake up and escort us!
Finally it was morning.  The proprietress came and made us a nice breakfast in her messy kitchen.  She asked if we planned on staying another night.  "No thanks," I said in German.  "It's too big and too dark.  The kids were scared." (That's right, blame it on the kids!) She seemed to sympathize and wished us a "gute Reise" (good trip).  Goodbye Factory 41!
Now, I'm sure in-season, Factory 41 is clean and well run and a good place to stay.  We just happened to get there on a bad day (okay, bad week ).  And the town of Plankenfels was definitely fun to visit.  Will we go there again?  Probably not; but The "Hostile Hostel" (as my son called it), will always remain one of our favorite stories.  After all, how often does a family get to brag about staying in an un-haunted house?

Oh my what a creepy place! Does make for a good family story years later.

Thanks Janis. It still makes us laugh when we talk about it.