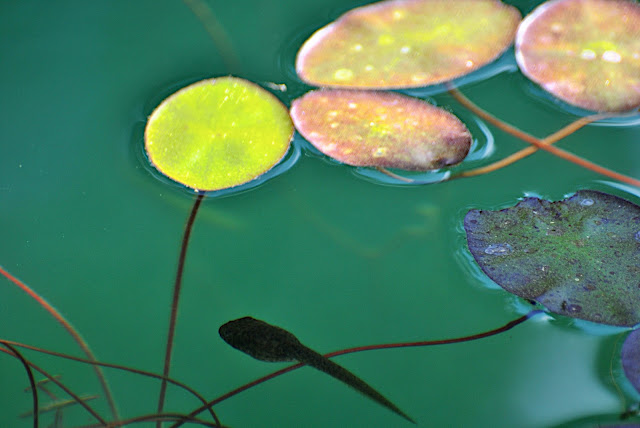 Perhaps the princess was right when she flung the frog to the wall and cried, "Get away from me you odious toad!" But as every Brother's Grimm reader knows, instead of going "splat!" the frog turned into a prince. And he didn’t turn into any old prince - oh no - he had to turn into a handsome, caring, forgiving prince that caused the princess to fall head over heels in love, and when they got old enough (I like to add that part), they married. As if that weren’t reward enough, they also inherited a kingdom and were subsequently crowned king and queen.
Did they live happily ever after? Not quite. Unfortunately for both of them, the king carried over some latent DNA and the queen gave birth to a tadpole. I'm sure at that point she would have loved to throw the king against the wall again, but she was too tired and he was too tall.
They named the tadpole Hope, which seemed like an appropriate name until the queen's mother-in-law began referring to her as "Hopeless." Nevertheless, Hope lived a peaceful life in the royal pond, protected night and day by the king's royal guards.  Each morning the queen perched on a tree stump and sang to her royal offspring.  Each evening the king knelt down and told her stories of his time as a bewitched frog. The tadpole princess seemed to appreciate their efforts, swimming in lazy circles at their feet.
Months went by and Hope grew slowly. Each day the royal veterinarian peered through his magnifying glass, hoping to see a tadpole’s tiny leg, but none came forth. Still the royal couple had high hopes. Surely this meant their little princess was no ordinary tadpole! One day she'd become a frog; then they would invite the most eligible bachelors from all the land to come and kiss their little darling. They hoped true love would set her free and she could become the princess she was meant to be.
In the meantime they must educate her. A royal tutor was hired. At first he crouched over the tadpole princess, lecturing at length about nouns and pronouns, but Hope just drifted away. Then the royal tutor submerged a tapestry embroidered with multiplication and division tables, but after one look Hope just slipped away. Finally, while the princess swam alongside, the royal tutor strolled around the pond narrating folk tales and fairy tales. After that he never lost sight of Hope.
The years went by and Hope matured. Her legs emerged, her tail shrank, her lungs developed, etcetera, etcetera. Finally the day came that they'd all been waiting for, the tadpole princess became a frog. The king and queen were overjoyed.  Immediately they sent forth a herald to spread the good news. Then the king issued a proclamation inviting all unmarried men of noble birth to come and kiss the frog princess. If true love answered and she became human, the lucky man would marry her and inherit half the kingdom. Only the bravest, most handsome and worthiest need apply.
Eligible males came from miles around. The frog princess sat on a golden throne and waited patiently for each suitor to kneel and kiss her.  About every ten kisses she took a breather to splash around the pond. This continued for some time.
Then one day there came a gentle fool who seemed to love the frog princess for
her merits alone. He stroked her green skin and praised her bulging eyes. He said he would wed her even if she remained a frog. He would not give up Hope. Then he kissed her and true love spoke. The princess croaked and became human.
The king and queen whooped with joy; the entire kingdom cheered, and the
princess blushed a lovely color that complimented her emerald green gown. She curtsied prettily to the gentle fool and embraced her parents for the first time.
After taking a moment to clear her throat, Princess Hope faced the kingdom and spoke of her time as a tadpole. The queen was comforted to know the princess had loved life in the pond. The king was relieved to learn that hiring a royal tutor had been money well spent. Everyone was happy, everyone content.
Three weeks later a royal wedding was held on the palace grounds. The king beamed as he walked his beautiful daughter down the ivory runner to the marble gazebo. Hope took her place next to the gentle fool and the ceremony began. They had just gotten to the part where the priest says, “. . speak now or else forever hold your peace,” when they heard a booming croak. The princess jerked her head up and everyone gaped to see a huge bullfrog come jumping down the aisle.
“Charlie!” called the princess. Hitching up her gown, Hope flew down the aisle and scooped the frog up in her hands. “You came for me, oh Charlie!” she cried. “Mother, this is my own true love.  He courted me each night, singing his beautiful song!”
The queen hurried over, “But Hope, the gentle fool is your true love; his kiss hath set you free!”
“But dear mother, no one asked whom I loved! It is true the gentle fool loves me truly, but I love Charlie and he loves me!” and with that, Hope kissed the bullfrog.
Poof! The congregation stood in shock for now there were two frogs on the ivory runner, one of them wearing a little white veil.
“Noooooo!” yelled the king, and
“Ohhhhhh!” shrieked the queen, and
“Rib-bit!” bellowed the frogs.
Then with her tiny veil fluttering in the breeze, Hope and her one true love leaped back down the aisle and plopped into the pond.
And they lived happily ever after.

Truly an amazing and wonderful story. I have only one tiny suggestion.

Thank you Lin Stone/Earl Roberts! You have made my day. I need that encouragement!
I will definitely give your suggestion some thought; I appreciate it!